This is the first installment of my newly-thought-up series called “To Talk About Bangla Books.” Given the fact that Bangla has this huge collection of good literary stuff and I thought why not talk about them in my blog and they just might pique interests of readers and more fortunately, translators! 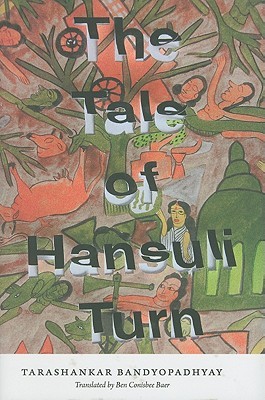 This is the first novel by Tarashankar Bandyopadhyay I read. Set in 1941, the novel explores the sub-tale (upokatha in Bengali. Interesting to note that the author chooses to call this a sub-tale and not a tale/story, in tandem with the civilized world’s disinterest with the “other world”). The story starts with the villagers’ or residents’ worry about a strange particularly loud whistling in the forest every night. Some thought it must be the restless spirit of “Babathakur” (Godfather) who died years ago before setting the place for Kahars (those people were ‘classified’ as Kahar) to live. They were really scared and thinking up ways of sacrifices and worships to please him. Their leader Banowari was in support of this. Things got complicated when Karali, the youth with modern outlook discovered that it was a king cobra and killed it. Later all other condemned him of this sinister act because that snake was Babthakur’s ride (bahan). Say it because of superstition or tradition, but from then on there was continuous tussle between the new and the old, between faith and logic, between unquestioned submission to the known process and the finding out new dangerous ways. And this has set the core tumult in the novel.

A constant politics is being played at every conversation, at every action, and how natural and fundamental they are in the core rural life where a person’s very existence depends on small decisions he takes in his daily life, can be easily felt in the author’s expert observations and insightful depiction of human mind. The relationship equations of friendships and love are more fundamental to human nature in here and above the normal sense applied to the civilized world.

The language is diversely rich with regional variations of Bangla, and most of the times, the narrative is closely linked with the dialogues and thoughts of the characters. It has been repeatedly emphasized in the novel that the war and hunger of outside world will never affect the reclusive bank of Kopai river (shaped like a scythe, hasuli in Bangla. Pretty much reminded me of Marquez’s Macondo). When at the end, during WW2, the sinister military planes flew over their sky and devoured all the trees in which they slowly had constructed their interdependent habitat, when all his (Banowari’s) people betrayed him by leaving their farmlands and joining the factory, one can see how the outside can affect (or ruin) an almost hidden patch of the forest-land in rural Bengal. The influence of the outsider (Karali, slowly became an outsider to the people) is one of the themes in the book. Coetzee’s works e.g. ‘Age of Iron’, ‘Disgrace’ explicitly deal with this theme. The comparision is far-fetched but worth mentioning.

I can safely conclude that this is a hugely original work and it takes some time to get over the dark, mysterious, mesmerizing world of the bend of Kopai river.

This has a translation available, published by Columbia University Press and can be found here .